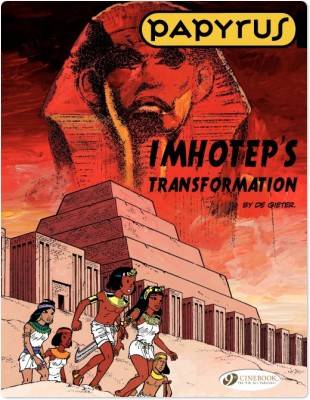 Papyrus and his friend Imhotep head off for Sakkarah, where a statue must be erected to give praise to the Pharaoh. While navigating the Nile, they save an old man threatened by a crocodile. In Sakkarah, the Pharaoh's life is threatened too: He has been poisoned. If he dies, the future will be very bleak... So our young heroes have the idea of letting the old man they saved play the role of Pharaoh, seeing as the two men look very much alike... But the deception may not last for long, and Papyrus has to find an antidote for the Pharaoh as quickly as he can! This series tells the tribulations of a young fisherman, Papyrus, and the princess Theti-Cheri, daughter of the Pharaoh Merenptha, in a very precise reconstruction of old Egypt (the XIXth dynasty).